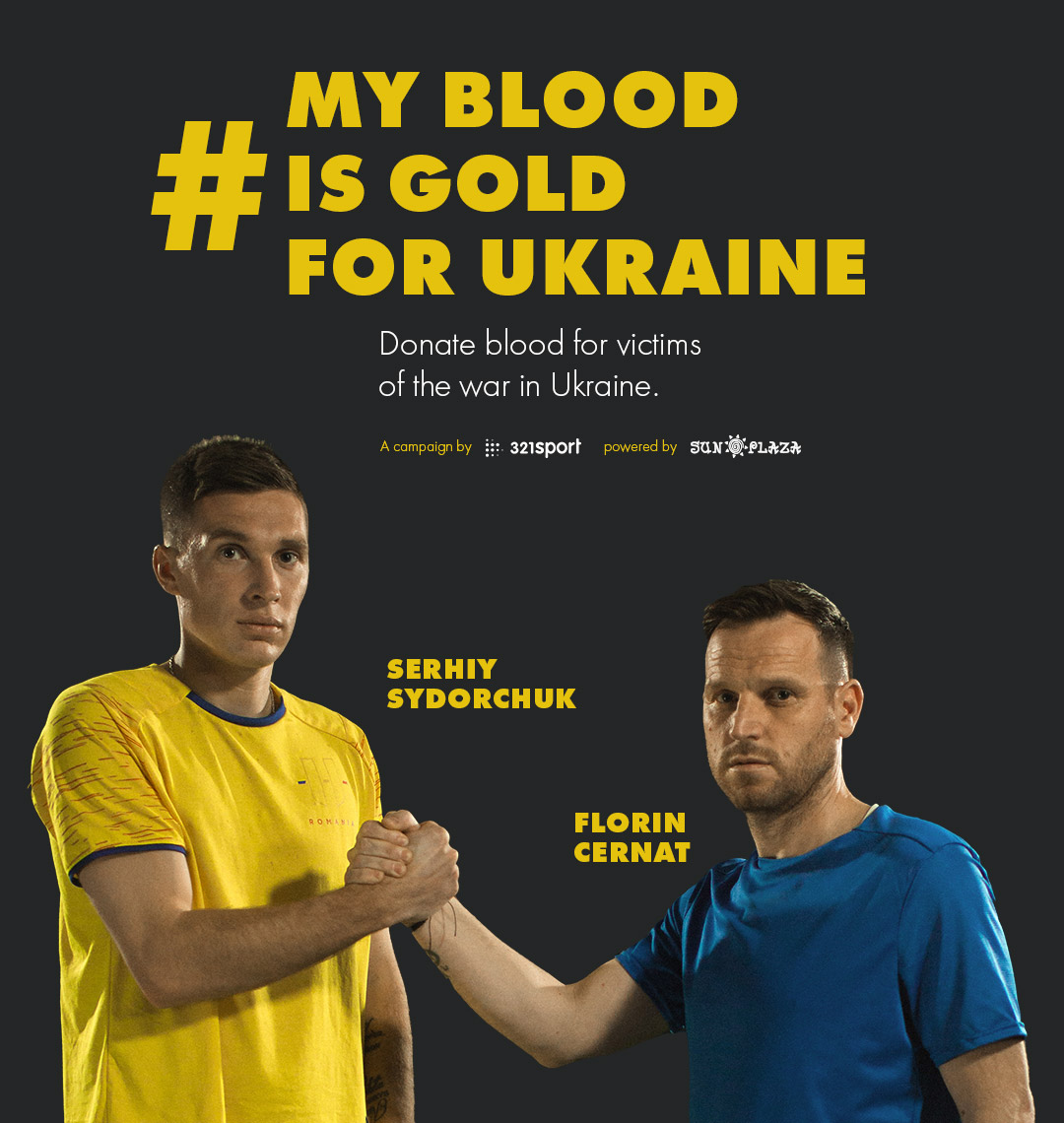 My Blood Is Gold For Ukraine

We all know about the war in Ukraine. It is useless, inhuman and horrific.

We salute and congratulate all the people who have helped the victims of this war with the necessary resources: transport, accommodation, food, clothing, employment, volunteering of any kind.

The solidarity manifested in the entire world has demonstrated that humanity will always win, and good thoughts will have the ability to overcome any challenge.

But we also know that in Ukraine blood is needed for the wounded. In these extremely difficult moments for the Ukrainian people, we want Romanian blood to reach our neighbors in Ukraine, with whom we are in solidarity in these times.

Beyond that, we want the message that was sent from Romania to reach the entire world and encourage people to donate blood to help victims of the war in Ukraine. Or, why not, to simply donate blood for the first time in their own country, saving the lives of those who need it.

Serhiy Sydorchuk and Florin Cernat. They are the football players that (not by accident) are at the center of this video campaign.

Both of them have proudly represented their countries in international competitions. Sydorchuk is a key player in Ukraine’s national football team. Florin Cernat not only played for the Romanian national team, his debut match was in fact against Ukraine.

Presently, Sydorchuk plays for Dynamo Kyiv, while Florin Cernat wrote history with Dynamo Kyiv. Football lovers will surely remember the match in which Cernat scored the last 2 goals in the historic victory of Dynamo Kyiv over Bayer Leverkusen in the group stage of the Champions League. In Ukraine, both players are highly appreciated for their contribution to society through sport.

In their personal lives, the two are not linked just by a common path in their careers as footballers, but also by a strong friendship, which was amplified by the war. Sydorchuk, along with his wife and three children, left Ukraine and fled to Romania to escape the war, and Cernat immediately came to help.

Not only that, filming for this campaign is taking place only a few days after Serhiy became a father for the fourth time, in Romania, as a refugee. We truly thank him for the fact that, during the current context, he agreed to film this video to promote blood donation for victims of the war in his native country.

Serhiy Sydorchuk and Florin Cernat encourage you to donate blood for the victims of the war!

Remember: blood is vital and it can’t be bought. If you can donate, please do it.

This website uses cookies to improve your experience while you navigate through the website. Out of these, the cookies that are categorized as necessary are stored on your browser as they are essential for the working of basic functionalities of the website. We also use third-party cookies that help us analyze and understand how you use this website. These cookies will be stored in your browser only with your consent. You also have the option to opt-out of these cookies. But opting out of some of these cookies may affect your browsing experience.
Necessary Întotdeauna activate
Necessary cookies are absolutely essential for the website to function properly. These cookies ensure basic functionalities and security features of the website, anonymously.
Functional
Functional cookies help to perform certain functionalities like sharing the content of the website on social media platforms, collect feedbacks, and other third-party features.
Performance
Performance cookies are used to understand and analyze the key performance indexes of the website which helps in delivering a better user experience for the visitors.
Analytics
Analytical cookies are used to understand how visitors interact with the website. These cookies help provide information on metrics the number of visitors, bounce rate, traffic source, etc.
Advertisement
Advertisement cookies are used to provide visitors with relevant ads and marketing campaigns. These cookies track visitors across websites and collect information to provide customized ads.
Others
Other uncategorized cookies are those that are being analyzed and have not been classified into a category as yet.
SALVEAZĂ ȘI ACCEPTĂ